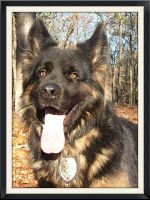 ON JULY 16, 2012 DIESEL WORKED HIS LAST TOUR OF DUTY WITH HIS PARTNER PATROLMAN MICHAEL THOMPSON AT HIS SIDE. K-9 DIESEL WILL ALWAYS BE REMEMBERED AS AN HONORABLE MEMBER OR OUR POLICE DEPARTMENT, A MODEL POLICE K-9 AND A FRIEND TO OUR COMMUNITY.

Ptl Thompson (LBTPD) and his K-9 partner Diesel competed in the 2007 USPCA Region 15 K-9 Trials on Saturday, September 22nd in Millville NJ. They competed against police and correction K-9’s from throughout NJ and surrounding states. The competition consisted of Obedience, Agility, Article Searches, Box Searches, Criminal Apprehension with gunfire. Ptl.Thompson and K-9 Diesel placed in first place (Top Dog) and finished with a score of 687.32 out of 700.